Written by Agustín Michlig
Updated over a week ago

What is the purpose of layered zoning?

Zoning allows us to classify our field in different productive zones in order to be more efficient in the application of inputs while reducing costs and increasing productivity.

How to begin zoning?

First, it is necessary to enter the option "Zoning" that you will find in the left menu of the platform:

You can select up to 7 layers, including satellite images and yield maps. In this step it is vital to choose correctly the layers to be used, recommending those in which the variability of the field is manifested (critical period in different years for example). Soon it will also be possible to use other layers that are part of the platform, such as altimetry, nutrient maps and other vector layers. 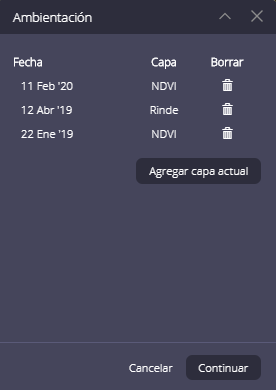 Once the layers that represent the zoning have been selected, it is necessary to select the zoning method. By default, the platform will use the manual method generating a histogram based on the selected layers. If the automatic method is used, a clustering algorithm will be executed, classifying the zones automatically.

In case of advancing with the manual method, the selected layers will be weighted altering their incidence on the final zoning. The % to edit will depend on agronomic factors that may have an indirect impact on the final map, such as NDVI images of seasons with abnormal water regime.

In this step it is also possible to divide the zoning in up to 7 field zones/heterogeneous zones.

When you select "Generate Zoning" the platform will generate polygons of each field zone in order to work on them in an isolated way.

By positioning the mouse over a field zone and right-clicking on it, you can reassign field zones.

Selecting "Tools" will activate a set of functions that will allow you to edit or adjust the zones map/prescriptions based on particular requirements. Among them are distinguished:

With this tool you can simplify the polygons by eliminating the points that make it up. In this way, a less "complex" and lighter file will be created in order to facilitate the piecemeal reading of the variable application controllers

With this other tool, the platform will remove those smaller zones that do not justify a differentiated treatment and that could also generate complications to the machinery/controller that will load it.

Finally, the tool "Cut" allows cuts along the field zones, allowing the generation of new polygons for differentiated treatments 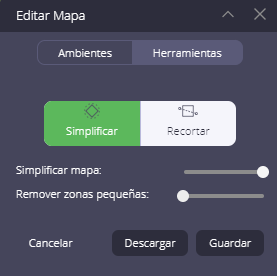 What can I do once the field zones are generated?

Once the field zones are generated, inputs and values can be assigned to the them so that a prescription can be created for a variable application of inputs. 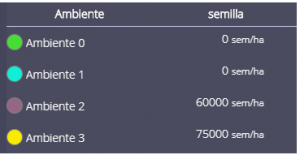 Once the prescription has been generated, it can be saved in My Maps under the desired name, and then it can be edited and reused as many times as necessary.

In this way, having identified the different field zones in the farm, you can apply the inputs correctly in each of them. For example, in the field zones with higher yield potential, the sowing density may vary in relation to the low potential field zones. In this way, it will be able to increase productivity and reduce costs; this being one of the most valuable features of the platform.

Did this answer your question?